I had cause to squeal like a little girl last night, and that cause was Moogerfoogers. 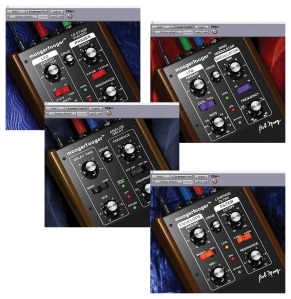 For those of you that don’t know, the Moog Music company (makers of fine analogue synthesizers) also makes a range of effects pedals these days called Moogerfoogers. And I dare you to say “moogerfooger” ten times fast. They’re all-analogue and are practically modular synth components, and they cost somewhere between $200 and $900 each. A bit rich for my budget. However, Avid, the folks who make ProTools, have managed to put together some really great software emulations of the real thing. It’s not the same, that’s for sure, but they do a really good job of reproducing the effects they create digitally. The pack of four sells for $500 these days, which is also a bit much for me to drop on four audio plugins, even in the midst of trying to update my studio.

Last night, however, I found hope. Back when I first bought my Mbox2, I sprung for the “Factory Bundle”, which came with a bunch of extra bits of demo software like Melodyne, Abelton, Reason, and most importantly the Moogerfooger Analogue Delay. I have used this delay effect on every major Psycliq recording to date, and I just absolutely love its sound and definitely wanted to keep it working during the upgrade. Thus, I went poking around the internet to make sure it would still work when I upgrade to ProTools 9, and I saw that I would have to get a patch from Avid to keep things happy. Not too surprising, I had to do the same thing when I upgraded from 7 to 8. But then I found something interesting.

In the Avid store, I stumbled across the Mbox and Mbox 2 Factory/Producer Factory 8.0 Upgrade for $15. It was a bundle that included all four Moogerfooger plugins as well as a few other nice ones, including the Cosmonaut Voice effect that I was fond of from the original Factory pack. For only 15 bucks, I was expecting this to simply upgrade the license to the plugins I already owned. Imagine my surprise then when I found out that it does in fact come with everything on the box, in full, no strings attached.

I quickly fired up ProTools and pulled open Mettle to make sure the delay plugin still worked, at least. Having confirmed that, I dug through the menu and found the other three Moogerfoogers happily staring at me. I toss the lowpass filter onto one of the tracks and hit play.

This is the part where I squealed with glee.

So for $15, I’ve got a suite of world-class effects, and I can’t wait to see what I can do with them now. Stay tuned to hear.

Psycliq is a one-man musical project by Justin Richer, working in the strange musical world of experimental electronic rock. View all posts by psycliq