First, a quick note: Have you downloaded the Telegraph EP yet? It’s a limited edition! Not many copies left and only a couple weeks to grab them!

After I basically finalized the the mix for “House of the Rising Sun” to a point I’m pretty happy with, I continued to poke at it a little bit more because I can’t leave well enough alone.

At first it started with me just cutting out some of the tracks and adding a few filters to other tracks to create a very sparse organ-driven version of the song. The regular mix is a kind of slow, loud shuffle with lots of layers happening to it, and I was looking to trim things down and open them up a lot. Of course this wasn’t good enough and I ended up routing the melody synthesizers through the organ sounds. Even so, it was nice and simple and a good exercise in remixing from existing track stems.

Then things got a little nutty. I pulled open the regular mix and swapped out the drums entirely for a much more driving march beat, something I’ve been calling a techno-stomp. I also mixed in most of the synth sounds throughout the song instead of fading them in and out. It completely changed the feel of the song, and so I swapped out the effects on the bass and guitars and a few of the other synths. I even added a flanger to the organ, just because. However, this wasn’t nearly cacophonous enough, so I added a secondary drum track, some synth bass, and some mellotron strings to fill things out.

My poor little computer was having trouble keeping up with the results, especially when I bounced out all the individual tracks, but I like how it sounds. I think it has on the order of 17 active tracks, most of theme stereo with plugins running on top. For reference, most Psycliq songs have about 5 or 6 stereo tracks, tops.

What started out as a little production exercise is going to turn into a digital single. Sometime in the next few weeks, you’ll be able to pick up “House of the Rising Sun” from all over the place with at least these three mixes, maybe more if I go even crazier.  And then it’s on to some new, original music!

Update: This album is no longer available for download.

Last week, my wife and son were out of town and I had the house to myself. I’m given to understand that this is when a poor bedraggled husband like myself is supposed to drink beer and watch Bruce Willis movies. Unfortunately for such plans, I am not a fan of beer and my wife is a fan of Bruce Willis movies and would have been upset if I’d had a marathon without her.

So what’s a man to do but hole up in the studio and record a whole new album! Ladies and gentlemen, I present The Telegraph EP. 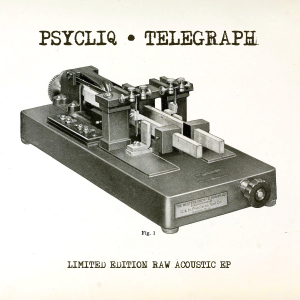 OK, so it’s not exactly a whole new album. It’s more of an EP of cover songs. I recorded all six of these songs in straight takes with just an acoustic guitar and a vocal mic. No overdubbing, no special effects (apart from a touch of EQ and reverb to compensate for the terrible room acoustics I have here), and no fancy packaging. What you get is a raw collection of six acoustic tracks, not available anywhere else. And you can download it for FREE, right now!

But, I will admit, there’s a bit of a catch. In a world of constant availability and unexpiring archives, I wanted this little album to be something different. It was recorded on a whim with very little forethought or afterthought (or midthought at that rate), and while I want people to hear it, it’s going to vanish just as quickly as it came into being.

Starting tonight, the Telegraph EP will therefore remain available for free online for up to three weeks or fifty downloads, whichever comes first. At that point, it will takes its place in history. I don’t plan on doing any physical CD versions of it or releasing it on iTunes or anywhere else. It’s going to be a bandcamp-exclusive digital-only limited-time limited-quantity (and yet totally free) flash in the digital pan. After you’ve downloaded your copy, please tell all of your friends to grab a copy, too! Bandcamp even makes this easy with a little “share” button.

So why are you still here reading? Go download your copy today and be a part of history!

I’ve been slowly but dilligently working away on finishing up “House of the Rising Sun” here in the studio, and I’m glad to say that it’s nearly complete. I’m trying out all kinds of new production techniques and getting a handle on new pieces of software and hardware while putting this together. 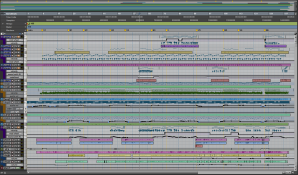 The results are currently something of a monster. With all of the tracks activated (including the MIDI tracks that have since been printed to audio), I had to zoom out as small as I could just to get them to fit on the screen. Now this is nowhere near what a Celldweller song looks like, but for me, it’s pretty crazy. There’s definitely a lot going on in here, and I wanted to try and bottle some chaos with my take on this song. 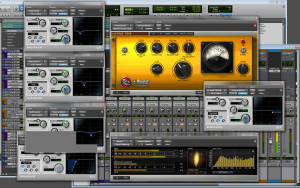 I’m also trying my hand at doing a bit more EQ and mastering on this track than I ever have before. It’s tricky business, and I’m sure there are a lot of things I’m doing wrong. But in the end, It’s all a learning experience, and I intend to take everything that I’m doing here and apply it to future recordings.

Overall, I am really liking how this is coming together. “House of the Rising Sun” should be available in about a few weeks’ time, once I’ve got all of the final mixing taken care of and can get it packaged up. It’ll be available as a digital single from the Bandcamp site, so keep an eye out!