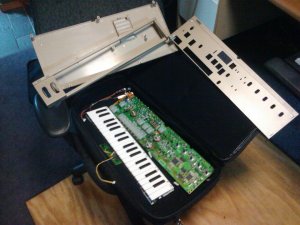 You may recall that a little while ago, I cut my venerable microKORG synthesizer in half in an attempt to build my own MicroMoorg style synth. As soon as we had it sliced apart, it became clear that putting it back together the way I wanted it was going to be a bit trickier than originally anticipated. So I just popped the guts back into the shell and kept it safe in its bag for a while longer to think about it.

Then, the other night, I had a revelation as to its construction. Initially, I’d been thinking about how to attach some plates to the open space between the two halves of the shell to hold the hinge, and then just tossing some pieces on the side for decoration. That’s when it occurred to me: by making the side pieces actually part of the structural integrity of the project, I could give the important pieces a lot more to hold on to. This seemed like it was going to be outside of my woodworking skills, so I sought professional help.

With a basic plan in mind and parts of the plastic shell in hand, I headed out to a local unfinished furniture store last night for some advice. I was hoping that they’d say something like “Oh yeah, we can just toss that right together for you!” Unfortunately for me, my little out-of-left-field project didn’t quite fit with their more pedestrian furniture building. Different lumber sizes, doesn’t quite fit into their existing jigs and frames, etc. However, I did get some good advice for how I could put the thing together myself, so I’ve got something to go on. Looks like a new miter saw and some hardwood lumber stock are in my future. Not generally two things that you associate with synthesizers, but hey, we’ll see what comes out.